And what moved me to set up this private practice 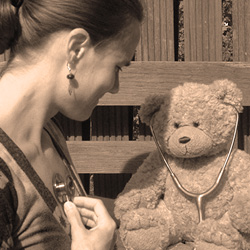 I am Maryse Duran, a dedicated doctor and graduate from the University of Amsterdam Medical School. From my early childhood I always knew I wanted to be ‘a doctor for sick children’.

After completing medical school and internships I followed this calling and worked on several paediatric intensive care departments (Erasmus MC- Sophia, LUMC), living my dream. I worked in Anaesthesiology (UMC Utrecht) whilst training to become a paediatric anaesthesiologist wanting to help the ‘sickest’ children in the paediatric intensive care department.
However at the end of my training my mother became seriously ill and I found myself in the difficult position of being both doctor and daughter to a patient. It was during this time that I experienced a completely different perspective regarding healthcare. Whilst being confronted with a number of options, relating to conventional medicine, I also became aware of their limitations. This led me to search for different ways of providing healthcare and as a result, I discovered complementary medicine. I found that complementary medicine is mostly based on ancient Eastern medicine. A medicine that is older than our Western medicine and holds a lot of wisdom, which I believe our conventional healthcare system could benefit from.

Complementary medicine fascinated me so much that I enrolled on several courses, including Emotional Freedom Techniques (EFT) at NOVET in Amsterdam. I studied Reiki I and II at Reikicentrum ‘De Oorsprong’ in the Hague, and became an intuïtive healer after graduating from a healing course at the ‘Centrum voor Leven en Intuïtie’ in Utrecht.
I also attended courses and lectures to enhance my knowledge, in particular those focused on mind-body interventions (meditation, relaxation, and visualisation) and body oriented techniques (breathing, yoga and massage).
I started seeing the tremendous value of complementary medicine, not just the treatments in their own right, but an even greater value when used in conjunction with conventional medicine. I also realised that I was not alone in my discovery, as I found that more and more doctors and therapists were recognising that both disciplines could complement each other.
With this new-found understanding, I decided to leave my anaesthesiology training and instead devote myself to my new passion: the integration of complementary medicine and conventional medicine to enhance the health and wellbeing of children. In July 2015, my private practice, MerlinMerlina was born.
Following my anaesthesiology work placement, I practiced for two years as a doctor in the department for preventive youth healthcare and in my holidays I worked abroad (Medical Checks for Children), also caring for children.
My experiences taught me that the ‘sickest’ children were not necessarily the ones lying in an intensive care unit. I also came to the realisation that I could not make every child better, as I had hoped in my childhood dream of becoming ‘a doctor for sick children’. I did realise though, that one can do everything possible to make a child feel better and in doing so, help their parents and carers feel better too. It is my opinion that the possibility of a child’s return to well-being (in whatever form this may take) is more likely to be achieved when complementary medicine and conventional medicine join forces.